Unavoidably, this guide is not exhaustive. Many vermouths are regional products that don’t get exported to the U.S., and admittedly, the listings here are biased toward the U.S. marketplace. However, the marketplace is fluid, and we will add more listings as adequate information becomes available.


Vermouth di Torino and other red vermouths in the Torino style

These are the products that are ostensibly both definitive of Torino’s vermouth traditions and closest to (imitative of) the original commercialized, bottled vermouth di Torino (Carpano’s). When a mixed drink recipe specifies “Italian vermouth” or “sweet vermouth”, a product from this style is implied.

Vermouth di Torino has protected designation of origin, but it is not enforced at the behest of the industry, because few brands would meet the requirements. Arguably, this is a supply issue, with international product demand outstripping the wine production capacity of the region. One example that arguably meets the designation of origin is Cocchi Vermouth di Torino.

A traditional regional style of vermouth with additional flavoring: added chinchona (and often gentian too). Splits the difference between a vermouth and a quinquina.

A traditional regional style of flavored vermouth: Vermouth di Torino with added vanilla flavoring. Adulterating Vermouth di Torino with bitters or vanilla flavoring—almost like a cockail—when drinking it is an Turinese custom almost as old as vermouth itself; this style has vanilla built-in. Because of the vanilla, this style of vermouth plays especially well with the significant caramel components and bold flavors of bourbon and straight rye whiskey.

Colorless sweet vermouth style invented and/or commercialized by Chambéry producer Dolin. The blanc style is frequently generalized as more herb-centric and less spicy than Torino-style rosso vermouth. Note that popular “bianco” vermouths from Italy were, one way or another (directly or indirectly) inspired by Chambéry Blanc, but evince different priorities (see below).

In the early years of the 20th Century, when Italian vermouth producers were diversifying their export product lines, some began introducing their own “bianco” style, loosely inspired by the Chambèry Blanc style (see above), but much bolder-flavored, and, if current examples are representative, often vanilla-forward and “feminine” (in sexist market-speak). Bianco vermouths remained a relatively obscure sideline to the red and dry vermouths until the late 20th/early 21st Century, when they abruptly became fashionable in large markets such as Russia, and now compete with red vermouths in total sales volumes.

Provençe, France developed its own successful vermouth tradition in the early 19th Century, possibly beating the Italians into the export business. There, the vermouth was both for drinking and for use as a cooking ingredient, such as for fish sauces. While there once were various producers in Marseilles able to take advantage of the local port for export, those products disappeared long ago as the style focused on what was its first and now its only representative: Noilly Prat (produced for nearly its entire history quite some distance down the coast in Languedoc, in a town called Marseillan).

Chambéry developed a regionally-characteristic lighter, subtler style of dry vermouth in the 19th Century, without any of the oxidation flavors of the Marseilles style. This style enjoyed a period of popularity during the austere mid-20th Century United States market, with Chambéry producers like Lejon, Dolin and Boissiere spawning much imitation, even driving Marseilles dry vermouth producer Noilly Prat to start producing a Chambéry-influenced style (today known as Noilly Prat Extra Dry) exclusively for the American market.

De-facto style of contemporary vermouths from the United States, principally from small artisanal producers in the West Coast wine industry, beginning around 1998. American companies actually have a history of producing their own vermouths dating back to the of Prohibition, although in the past these products were largely positioned as cheaper domestic imitations of imported product, and due to market conditions in the latter part of the 20th Century, the position of these domestic producers dwindled drastically. In recent years, some small wineries have taken a fresh look at the aperitif market and began developing products that aren’t imitative of European products and—consistent with the contemporary Slow Food and locavore movements—focus on regional botanicals. Notably, these new American “vermouths” do not tend to include wormwood amongst their botanicals, by choice. These new products are very much doing their own thing and none of them should be assumed to be drop-in substitutes for any of the traditional vermouths.

Spain has had a small vermouth tradition “flying under the radar” at least since the late 19th Century. A few transplants from Torino may have brought their vermouth tradition to northern Spain where they reinterpreted it through the local wines. Vermouth has also been sporadically produced in Jerez since the early 20th Century. As far as we can tell, no Spanish vermouth was ever imported to the United States prior to 2009, but we’re delighted to now have some examples of this distinct tradition. 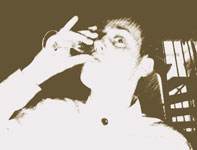 Special thanks to Eric Seed, Romée de Gorianoff, Alexandre Vingtier and Carl Sutton for their invaluable assistance on this project. Otherwise, the individual to blame for this site is Martin Doudoroff, a New York City cocktail enthusiast driven to this sort of folly from time to time.

Corrections, augmentations and general feedback, particularly from vermouth and quinquina producers, are all welcomed at martin@mixologytech.com.

The text and original images of Vermouth 101 is licensed under a Creative Commons Attribution-Share Alike 3.0 United States License. Bottle and label photography employed on the site are not covered by this license, belong to the brand-holders in question and are protected by copyright law. When in doubt, ask.